Besides of the Frame Aspect Ratio the pixel aspect ratio is the important thing.

Pixels can be square or rectangular: a square pixel has the aspect ratio of 1:1 (aka 1) but a rectangular pixel can be anything else.

How is the pixel aspect ratio calculated?

You need to know the video resolution (widthVideo by heightVideo) and the frame aspect ratio, defined by width x and height y ( xF:yF ). F is here just a symbol for frame.

On Computer screens and in digital processing pixels are in general SQUARE. Only for conversion scenarios software is able to deal or output rectangular pixels.

Modern HD TV’s use fortunately square pixels and therefore a video that was rendered for a computer screen should display normal on a TV screen. However, if the TV screen is older and/or uses rectangular pixels then your video would either be displayed stretched or squished OR the TV displays it in between black bars on top/bottom or left/right.

Let’s define following general rules:
if an image has 640×480 pixels then those pixels are all square pixel.

IMAGES: if an image has 640×480 pixels then those pixels are all square pixel.

PAL, NTSC, SECAM: those are ANALOG TV systems and they do not use pixels but analog signals in an interlaced manner.

Frame Aspect Ratio is also called Display Aspect Ratio. The term Frame describes in the photography and video world a single picture, i.e. the area of what you see in a picture. A photographer ‘frames’ a motif, i.e. decides how much of the motif will be seen on the picture. Imagine that you hold an empty picture frame in front of you and look through it.

Video production: How to mix a White Russian cocktail

The video was made for the makers of Kahlua and Absolut Vodka. This version is a brief 20+ second video…

As a general rule of thumb we could say the following: The ‘p’ stands for ‘progressive’ and the ‘i’ stands…

How much does a 3-min video cost? Industry ballpark numbers are: $5oo to $15oo / per minute of video, depending… 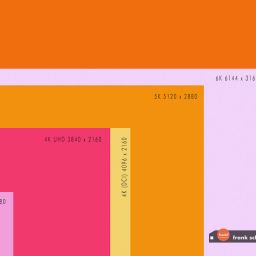 What does a video project involve and what costs can be expected?

Mainly, I shot video with gopro. In photo + video mode, gopro can only produce 12 MB photo and 1440 x 1080 video simultanously. We can’t choose other video format in this mode and since I shoot aerial photo/video using drone, it’s impossible for me to change mode, etc, on the fly. So I have to face this reality, producing 1440 videos, while what client mostly need is 1080p.

I use Premiere Pro, export as H264, Quicktime mov, and photo-jpeg codec, none produce desirable outcome in terms of sharpness.

I haven’t had the time to test the sharpness under certain circumstances but here’s my understanding of the GoPro 1440 video setting:
It is actually a
Image Size: 1920 x 1440
Frame Rate: 23.976
Pixel Aspect Ratio: 1.0
(I checked that with a GoPro Hero 4 Black and can’t make any statements for other GoPro cams)

So, in that case the pixel ratio is actually 1.o and not 1.33 like in my article which referred to a different camera format (1440×1080 with rectangular pixels) which simulates a 16:9 display format.

So far I don’t see a loss in quality.
Another criteria is your sequence setting, whether it is a 1080p24 or a 1080p30 or …
If you are using a 1080p30 AND you keep the length of the video I guess some interpolation will happen by adding the missing frames (24p to 30p conversion).
An option is to INTERPRETE the footage by selecting the clip, then select MODIFY->INTERPRET FOOTAGE: there you can interpret the footage from 24 to 30 frames (resp. 23.976 to 29.97) which results in a shorter video run time.

If all that conversion actually influences the quality in a visible, noticeable manner, … I would doubt it but in theory yes.

Loss of quality can certainly result from the final encoding process: there are several options that will influence the output, among them the codec and additionally the settings (bitrate, etc.).

To see what actually happens with your footage would mean to make several tests and see what the outcome is. Just play around with certain scenarios and judge the outcome.

What a great explanation and insightful reply.

Regarding the main problem of sharpness loss, I take a note your explanation of codec and bitrate. Will try to do some tests more seriously, though so far I’ve tried several settings. Generally, the original videos from 1440 are very good in terms of quality: sharpness, etc. But downgraded when converted to 1080 like I said. Recently, my agency rejected some of our footages (not all) due to 1754 x 1080 resolution they said, while I export it to 1920 x 1080, and so is what the properties say (1920 x 1080). The problem hasn’t been solved because I haven’t had any reply, but I think there is something that I miss. Maybe you have any theory?

Furthermore, I notice when we record video directly in 1080 mode, the quality is also not as good as 1440.

That’s what I can report at this time.

Again, thank you very much for your kind attention.
Fadil

I’ve found the answer (though a bit late to inform you).

The answer is simple: use the GoPro software.

The typical workflow would be: import all the mp4 files from the camera to GoPro Studio. Then fix the fisheye effect and select the clips we would like to use. Convert, then again, we can choose which part of the file we would like to use in production. Then export each footage. Import the footages to Premiere, and edit it as usual.

So, rather than import the files directly to Premiere, we should convert it using GoPro Studio. The quality will be there.

Hope this help other readers too, because I’ve never found this explanation anywhere.

thanks again Frank for the opportunity to discuss it and make posts.

Thanks for the update, Fadil!!!

Thanks for the update, Fadil !!!