Ending up with footage that was shot at different frame rates is a real world scenario — to handle that in the best possible way is helpful to understand what happens to footage when the frame rate is changed — changed in either direction: e.g. 23.976 to 29.97 or vice versa or even higher frame rates to one of those frame rates. That is this article about. My examples are based on an Adobe Premiere Pro CC workflow. However, the principle and effects of changing frame rates should be similar in other software.

It’s always best to shoot your footage at the desired output frame rate unless you want to make use of slow-motion.
Every conversion from one frame rate to the other — unless it is intentionally a slow-motion footage — is not ideal, however, in many situations the fall-out is not noticeable or it is neglectable. It will strongly depend on the footage (and scene) you have shot whether you can get away with a conversion or not. Additionally, the algorithm behind the conversion (so to speak … the software which does the conversion) is relevant as well. In general, in my opinion any scenes that involve ‘panning’ are more difficult than others.

First thing to mention is that a video clip that captures 10 sec of something will always be a 10 sec clip no matter in what frame rate it has been shot — because: the scene you were capturing was real-time 10 seconds. The difference among chosen frame rates will be that you captured more frames (details) within those 10 seconds: at a 30fps rate you have 300 frames but shot at 60fps you end up with 600 frames.

First scenario: let’s assume your project shall become a 30fps (or synonym for 29.97) movie:

In relation to your TIMELINE FRAME RATE: slower 24fps footage (when interpreted) looses audio and will be slightly shorter but should be ok. If it is not interpreted it’ll be real-time length but frames were added according to an algorithm. I don’t know which rules Adobe applies by default (like frame sampling, frame blending, or optical flow which are all available when Time Interpolation is applied) — may be the final decision for that is actually made in the EXPORT dialog where you can choose one of those three, but if that is the case it would be valid for all conversions in your movie and you still have no choice for individual clips. Let me know if you have gained insight into that question.

Faster footage can perfectly be used for slow motion purposes which is assumingly the common intention for fast frame rates. If you have footage that is not really fast but has to go on a slower timeline then the whole thing becomes problematic: like 30 fps footage on a 24fps timeline, see next EXAMPLE.

Conversions are never predictable — except for slow motion effects.
Watch out for footage that has faster movements or past pans because that footage is more vulnerable towards frame rate changes. With footage that has not much movement you should get away with either up- or downgrading frame rate speed. If applicable, you can also experiment with the 3 Time Interpolation methods:

Time Interpolation methods are used e.g. when somethin is stretched and frames are missing. Usually when you want to create a slow-motion effect but you do not have the necessary amount of frames in the original footage. You can experiment with the 3 options (frame sampling, blending, and optical flow).

Footage INTERPRETATION – what for?

When you interpret any footage for the specific timeline THEN you make sure to use all frames that were originally shot, however, you modify the clip length in either direction which results in a slow-motion or a speed-up of the scene. If you do not INTERPRET footage the original length of the clip will be kept intact when you drop it on the timeline, audio will be unaffected, however, frames are dropped or added depending in which direction the frame change goes.

As always, nothing comes for free 🙂

You can do it either way: the result of both methods is the same. The magic numbers are 80% or 40% speed reduction.
30fps footage slowed down at 80% makes it 24fps speed.
60 fps slowed down 80% leaves you at 48 fps and you can drop that on a 24 timeline and because it is evenly dividable you end up with dropping every 2nd frame which should look ok if the movement / pan is not too fast. Or you slow it down to 40% and you get the 24fps footage, the same as if you were interpreting the footage upfront.

Speed changes instead of interpreting footage leaves you the freedom to change speed of a clip more than once during its duration.

Speed duration instead of interpreting the footage is more like a different workflow which can achieve the same results. I am color marking my original clips according to camera type and original speed to keep a quick overview of my footage.

Those two are working against all speed changes: panning speed must be somehow fitting the resulting frame rate / timeline. So, watch out for that type of footage and plan ahead what it is used for. Other shot types are not that vulnerable regarding frame rate changes.

In the following I am showing how clips work on different timelines:

The above mentioned LENGTH of the clip, either the original or an interpreted clip will not change if you place them on different timelines. What will change is the number of frames used to accomplish that. See below in all examples, the 32 sec clip is always 32 seconds long but the number of frames changes.

Therefore, you can actually compose a movie on a certain timeline and later drop it to another one. Your movie will still be the same length but all individual clips will perform differently and you likely see a quality change. Some clips improve, some worsen, depending on what the input was. 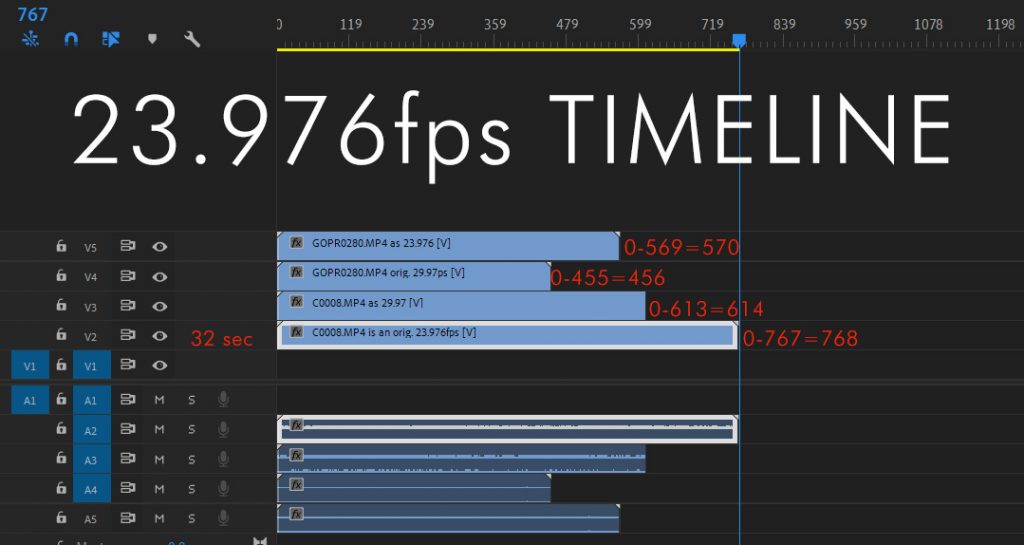 C008.mp4 (an 23.976 file): to reach full play time it is required to add frames
C008.mp4 interpreted as 29.97: When you place this 25.6 sec long clip on a 29.97 timeline you can use all frames of the clip
GOPR0280 (orig 29.97 file with 570 frames): no modifications, it is a native fit for the timeline and it plays 19 seconds and uses all its original frames: 570
GOPR0280 interpreted as 23.976: the interpretation gave it a new longer length which works on a 23.976 timeline (slightly down slowed) but on this 29.97 timeline there aren’t enough frames for that length, therefore some new frames are added. Result: possibly a loss in quality.
Notable is that the GOPR0280 was basically a ‘real’ 29.97 clip that could perform like native BUT the INTERPRETATION tells Adobe Premiere that this file shall be considered a native 23.976. 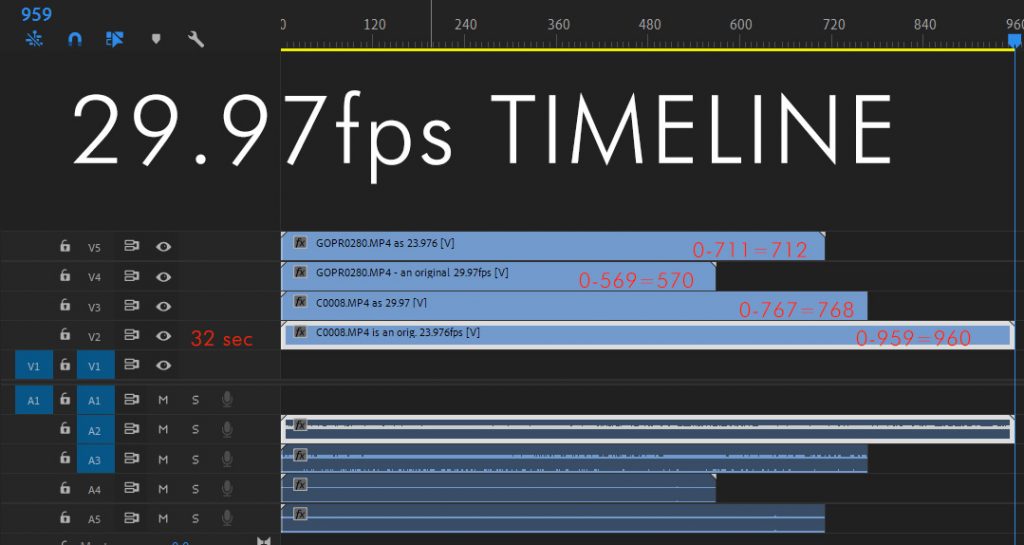 Actually all files behave like on a 23.976 timeline, as if you were starting out on that timeline.

Even if that shows you can do that, you need to keep in mind that we have seen that the individual clips, depending what their original state (including interpreted state) is, will perform differently on a different timeline.

A possible effect is that formerly smooth footage is not as smooth any more (look at panning and fast movements). 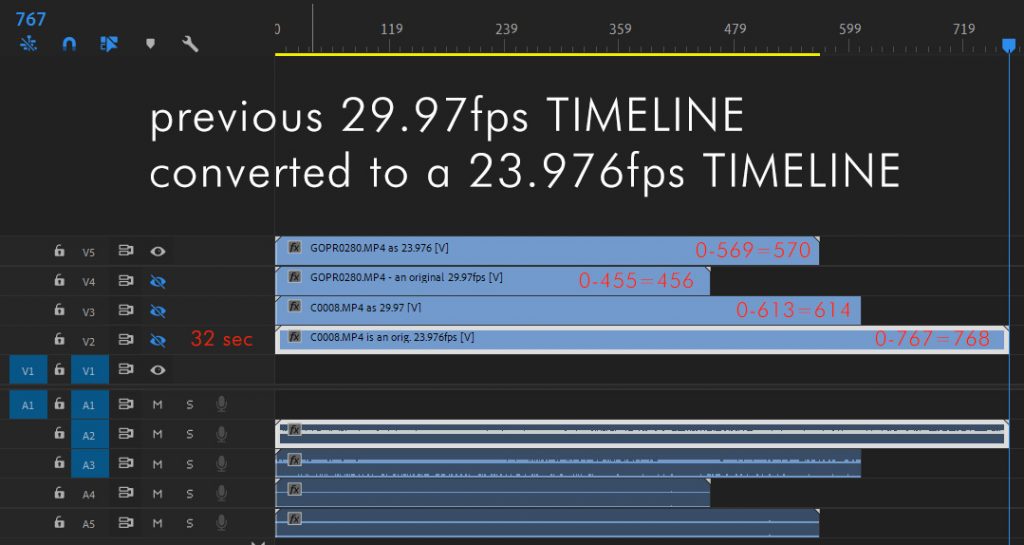 +++ Disclosure: On my pages I might talk about products and provide a link to Amazon.com. As an Amazon Associate I earn from qualifying purchases a small commission, however, it does not increase the price of the product and it doesn't cost you anything. As an Adobe Affiliate I might receive a small commission and again, it doesn't cost you anything!

Cinematic Aerial of the Coast of New South Wales, Australia

We use cookies to ensure that we give you the best experience on our website. If you continue to use this site we will assume that you are happy with it. Otherwise it is recommended that you do not further use this site.Ok, got it!Read more